SWALLOW was a Top Shelf Pick in Nonfiction at San Francisco Booksmith, and a Staff Pick at Brown University Bookstore. 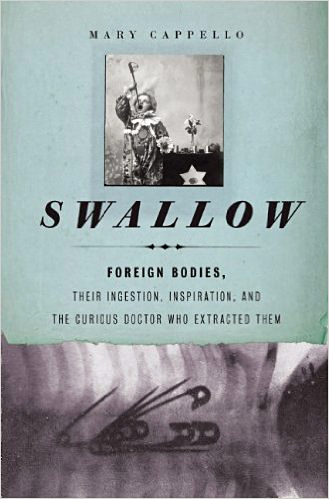 Mary Cappello has presented a rare breed of “Illustrated Reading” based on Swallow in such venues as Brooklyn’s Observatory; The Velaslavasay Panorama in LA; The Mütter Museum of the College of Physicians of Philadelphia; The Smithsonian Institution (NMAH); Dickinson College; Ursinus College; Claremont McKenna College; The West Laurel Hill Cemetery; The North Kingstown Free Library; at AWP, The Montana Book Festival, and at numerous bookstores across the land. She served as Keynote Speaker for the 6th Annual Foreign Body Pediatric Airway Endoscopy Course at Children’s Hospital of Philadelphia; as Presidential Lecturer for the ABEA (American Broncho-Esophagological Association); as Distinguished Visiting Professor for U/Penn’s Grand Rounds in Otorhinolaryngology; for the Hartford Medical Society; for Rhode Island Hospital’s Grand Rounds in Gastroenterology; and at “Das Wunderkino: A Cinematic Cabinet of Curiosities,” 12th Annual Northeast Historic Film Summer Symposium in Bucksport, ME.

» Read poetry Inspired by the Chevalier Jackson Foreign Body Collection of the College of Physicians of Philadelphia.

» Read about The Chevalier Jackson Home Movie Collection including footage of Jackson writing and drawing at his Schwenksville home and workspace.

On my way to speak with the Hartford Medical Society in March 2012, my host, Dr. Mick Bedard, told me about a 100-year-old medical training manikin named "Mrs. Chase." » Read more

Through a series of serendipitous connections, the daughter of one of Dr. Jackson's patients contacted me. She had read an excerpt of Swallow in ProTo magazine, and was reminded of her father’s case.

Following my meeting with Joseph Burke’s family in the Mutter Museum in Sept. 2011, I received an astonishing and moving account of a five-year-old boy... » Read more

I never thought my career would bring me into dialogue with a sword swallower. Dan Meyer, head of Sword Swallowers Association International, let me interpret his work, and in the process has taught me things long past Swallow's presumed completion. » Read more