“With AWKWARD: A DETOUR, Mary Cappello becomes to my mind now the Kepler of human flesh and bone and of the soul of the worlds in which they move.” 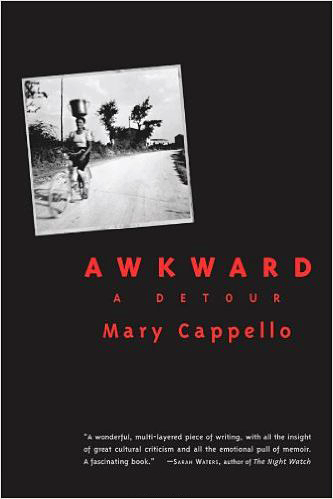 The Los Angeles Times Bestseller is now available as an e-book.

Without awkwardness we would not know grace, stability, or balance. Yet no one before Mary Cappello has turned such a penetrating gaze on this misunderstood condition. Fearlessly exploring the ambiguous borders of identity, she mines her own life journeys — from Russia, to Italy, to the far corners of her heart and the depths of a literary or cinematic text — to decipher the powerful messages that awkwardness can transmit.

A thoroughly engaging narrative, by turns alive with humor and opening into delicate estuaries of thought, Awkward: A Detour is a book-length essay that ranges across subjects and conditions as diverse as ontological discomfort and situational silence, immigration and stuttering, tact and its etymological association with touch, the life and work of Rainer Werner Fassbinder, Emily Dickinson and Henry James, as well as the letters that an Italian grandfather wrote to the author but never sent her when she was a child. The book also considers precociousness, prodigiousness and other forms of knowledge out of range and out of bounds, as well as diplomatic and ambassadorial relations between nations and between family members. Awkward: A Detour does all of this through constant and immediate returns to scenes that readers will recognize drawn from the most mundane and significant aspects of daily living.

Whether she is meditating on John Kerry’s perceived awkwardness as a determinant in the shape that 21st century history would take, or on the beguiling and seductive aesthetic of an unreadable novel by Henry James, whether she is describing the awkwardness of finding a death certificate of a loved one in a drawer filled with insignificant files or of dissecting a frog without supervision at age 10, whether describing girls, who, in flight from awkwardness, choose to disappear, or children deemed awkward for knowing more than their child bodies or child minds are allowed to contain, Cappello writes with a rapturous and commanding energy.

Readers can read Awkward: A Detour in pieces; they can pick and choose the form of awkwardness they wish to engage. But the book is also meant to be read beginning to end, rewarding readers with patterns laid down by an expert weaver, unexpected peaks, and a language that becomes more deeply textured and poignant as it goes.

Taking as their impetus the idea of awkwardness as a symptom of an impossibility, the rare and beautiful episodes that make up this book transform that which is awkward into a constellation of becomings. The book is a call, in the end, to be drawn into the space of one another’s untoward longing and misplaced middles, each other’s recalcitrance and each other’s squirm, each other’s immanent and lingering awkwardness. Awkwardness, in Cappello’s hands, becomes in so many ways a condition to be reclaimed and even celebrated for its human possibility.

After reading this book, we’ll never be able to consider our quests for harmony and fit in quite the same way, or for that matter the mundaneness of what we thought we’d understood, something so simple as the relationship between the ways human beings talk and the ways they touch.

“FINALLY, there is a study of awkwardness in all its many forms: speech, touch, breathing in public, clumsiness. Author Mary Cappello writes of situational awkwardness; of immigration and its attendant awkwardness; of how it pops up between family members, even nations; and of the important place it has assumed in the lives of creative people (Emily Dickinson, Henry James and Rainer Werner Fassbinder, to name a few).
In Awkward, Cappello has written the book she wanted to read. It is an unplanned manifesto against the shiny smoothness of thought, movement and desire. “Let us turn away. Let us turn awkwardly and see where we arrive. Toward an alternative system of ardor and gist, of ebullience and drift, of being and bearing. Toward speaking with the breath held. Un-toward.” — Susan Salter Reynolds, “Discoveries,” Los Angeles Times

“This vivid collection from [Mary] Cappello (Night Bloom) is a rare and insightful series of meditations that takes readers to Russia [and] Italy . . . through the literary and cultural landscape, and into the uncomfortable corners of the human condition: “Why is there nothing more right, in terms of an image of awkwardness, than shoes on the wrong feet?” Titling each short essay with a single evocative word (“Spasmodic,” “Untoward,” “Tactless,” “Jamesian”), the author finds more than 70 ways to approach her subject, from Emily Dickinson’s “efforts to perfect an awkward idiom” to Cappello’s accidentally eating dog treats in Northern Italy. The huge range of experiences here prove endlessly fascinating, and her prose never loses its grace or delicacy, even as she suffers the embarrassment of a party faux pas: “a wringing of hands to the tune of the memory of my insensitive blurt.” With keen skills of observation and careful attention to language, Cappello has crafted an elegant illustration of her conclusion that ‘awkwardness isn’t something to grow out of but to grow into.'” — Publishers Weekly

“The term ‘awkward’ brings to mind gangly adolescence and uncomfortable silences–a glitch or inconsistency in an otherwise perfect system. But Mary Cappello sees this glitch as the rule, not the exception, and shows us examples of its dominance everywhere–in all ages of life, in speech as well as in silence, and in the psychological, cultural, social, and spiritual worlds we inhabit. On this autobiographical and poetic ‘detour’ she talks of Emily Dickinson, Rainer Werner Fassbinder, and her immigrant grandparents with enough candor and dedication to possibly achieve awkwardness’s opposite: grace.”  — C. Schwennsen, The Elliott Bay Book Company Review of Books

“With Awkward: A Detour, Mary Cappello becomes to my mind now the Kepler of human flesh and bone and of the soul of the worlds in which they move. Kepler showed the gorgeous imbalance of ellipses making heavenly motions true. Cappello likewise shows the careful tremor of human ungainliness inclining all of us towards love and towards the adventure of unprecedented harmonies. Hers is a wonderful, suddenly essential book.”  — Donald Revell, author of Arcady, and Invisible Green: Selected Prose

“At once comforting and startling, Awkward: A Detour is a new kind of memoir, each sentence more of a discovery than a reporting back. The fluent subtlety of Cappello’s adventurous meditation — her talent for atmosphere and for letting certain words get the better of hern — makes memory seem like something worth re-making, and not the casual currency it has become. It is a remarkable achievement.”  — Adam Phillips, author of Terrors and Experts; On Kissing, Tickling and Being Bored; and Going Sane: Maps of Happiness

“‘I would seek out awkwardness over and against revelation,'” Mary Cappello writes, and her inventive, associative taxonomy of discomfort does exactly that, investigating the terms we use for those moments when we’re ‘uncoordinated,’ ‘clueless,’ ‘ass-backwards’ — moments which turn out, in her patient and eager excavations, to be revelatory indeed.”  — Mark Doty, author of Heaven’s Coast, and Atlantis

“Mary Cappello performs a brilliant literary hopscotch across continents and decades — alighting here on a luminous memory of an imperfect expression of fellowship or affection, there on an arresting insight into the infelicitous nature of language, of manners, of the body, of love. Daring in both content and form, Awkward is a wonderfully unpredictable riff on the human predicament.” — Dawn Raffel, author of In the Year of Long Division, and Carrying the Body

“Awkward: A Detour explores various ways of not quite belonging — culturally, coming from an immigrant family, here or in Italy, and personally, being among various groups. The awkwardness provokes a sensation of self-consciousness, which, thoroughly examined becomes a wise self-awareness — and this book exhibits plenty of wisdom in a thoroughly lucid and intense way. It’s an original, psychologically and culturally insightful book, a great pleasure to read.” — Josip Novakovich, author of Apricots From Chernobyl, and Salvation and Other Disasters

» Hear or read Cappello's interview for Quotidiana on writing at the border of poetry and prose, awkward quests, and more.

» Read an interview in which Cappello explains the origins of Awkward.

» Read Mary Cappello on Awkward and the lyric essay.